IMPORTANT:
To view a complete, regularly-updated listing of my Starsteeds blog's poetry and other lyrical writings (each one instantly clickable), please click HERE!

THE DARK (AKA THE RELIC AKA THE GOD RAT) 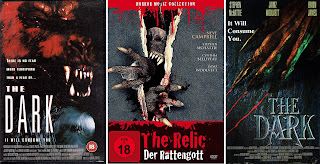 [This review's original version was posted on my Facebook timeline, 30 November 2019.]

Last night [29 November 2019], I watched a long-anticipated cryptozoology-themed movie, The Dark (aka The Relic aka The God Rat – see later), originally released in Italy in 1993. Directed by Craig Pryce, it stars Stephen McHattie as a leather-jacketed, motorbike-riding cryptozoologist (sounds familiar??) named Gary 'Hunter' Henderson. He is seeking a mysterious, scientifically-undescribed subterranean beast akin to a giant carnivorous rodent that excavates huge tunnels underneath a graveyard, feeds upon recently-interred corpses, and secretes a slimy substance that has miraculous, swift-acting healing properties. Filmed in Canada, this unusual movie also stars Neve Campbell, making her big-screen debut, as Hunter's girlfriend Jesse Donovan.

The monster is only seen in brief glimpses, and then only its toothy long-jawed head and long-clawed forepaws for the most part. The plot is fairly pedestrian - a good cryptozoologist seeking to study and preserve the creature for its taxonomic significance as an apparent prehistoric survivor and also for its slime's potentially immense medicinal benefits vs a bad vengeful ex-cop relentlessly seeking to slay it in revenge for its self-defence killing of his police partner when he was still on the force.

However, what has always intrigued me about this movie, which had particularly spurred me on for so long to seek it out on DVD (no easy matter!) and view it, was that its cryptid subject is more than a little reminiscent of a bona fide mystery beast. Reported from Scotland, this latter cryptid is known as the earth hound, and is indeed said to frequent graveyards and devour buried corpses. My book Mysteries of Planet Earth (1999) was the first crypto-book to investigate and document the earth hound, but if you click here you can access a ShukerNature blog article of mine concerning this fascinating mystery beast.

The DVD of The Dark that I own actually has a German-language cover (see centre picture in the trio of photographs opening this present blog post), on which this movie is entitled The Relic (in English) and The God Rat (in German), but the movie that plays on the DVD disc itself is the original English version and is entitled in its opening credits as The Dark.

Incidentally, this present movie should not be confused – but often is – with another cryptozoology-themed film also entitled The Relic. Directed by Peter Hyams and originally released in 1997, its very different plot concerns a monstrous entity inadvertently transported back to the USA from South America, which duly runs amok in Chicago's Field Museum of Natural History. I have this movie on DVD too, but haven't watched it yet – be sure that once I do, however, I shall be duly reviewing here on Shuker In MovieLand!

Last, but by no means least, The Dark is currently available (as of 27 July 2020 anyway) to watch in its entirety free of charge on YouTube (click here to do so). Consequently, if you're a fan of monster movies with a cryptozoology theme like I am, I strongly recommend that you make the most of this golden opportunity to watch this otherwise difficult-to-find movie while you can, in case it is subsequently deleted from YT. 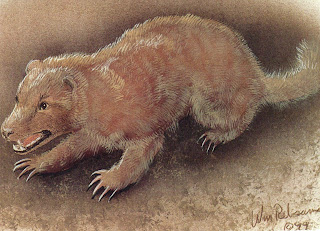 Reconstruction of the likely appearance in life of the mysterious earth hound as based upon alleged eyewitness descriptions (© William M. Rebsamen)