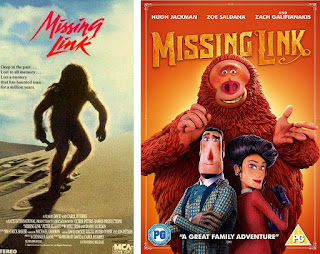 Publicity poster for Missing Link (1988) and front cover of official DVD for Missing Link (2019) (© David and Carol Hughes/Universal Pictures; (© Chris Butler/Annapurna Pictures/Laika/Universal Artists/AGC – both images are reproduced here on a strictly non-commercial Fair Use basis for educational/review purposes only)

Today's Shuker In MovieLand double-bill features two movies with the same title – Missing Link – but dramatically different formats and approaches, as will be seen. 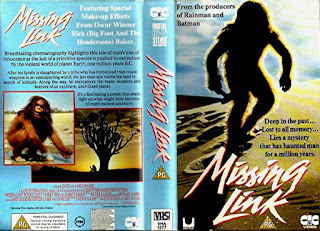 The full cover for the official VHS videocassette of Missing Link, the live-action movie released in 1988 (© David and Carol Hughes/Universal Pictures – reproduced here on a strictly non-commercial Fair Use basis for educational/review purposes only)

After rediscovering during the afternoon of 11 June 2020 the hitherto-unwatched (by me) Time Masters animated movie on one of a batch of old videocassettes that I'd taped various movies, TV shows, etc onto, back in the late 1980s and 1990s (click here to read my Time Masters review), I carried on going through them and found another unwatched gem of a movie - Missing Link, made in 1988, which I duly watched the following day, and what an awesome film it is.

Directed and written by David and Carol Hughes, Missing Link is produced in the style of a wildlife documentary with a voiceover narration by actor Michael Gambon. It is set in Africa one million years ago, and follows a voyage of discovery across this continent by a lone adult male 'man-ape' belonging to the early hominin species Australopithecus robustus. He is seeking others of his own species after having fled from the direct ancestors of ours, Homo sapiens, when his entire family was viciously slaughtered by them, leaving him as the only remaining representative of his species in that area.

This very unusual movie is more than a little reminiscent of another one that I watched not long ago, Jonathan Livingston Seagull (click here to read my Shuker In MovieLand review of it), in that although there is not a great deal of plot, the cinematography (again the work of the Hugheses) is absolutely spectacular. Missing Link was filmed on location in various Namibian national parks filled with iconic African fauna such as lions, elephants, giraffes, gazelles, zebras, mongooses, wildebeests, and those veritable avian locusts the red-billed queleas, whose immense flocks swarm and swirl through the sky like living composite super-organisms. 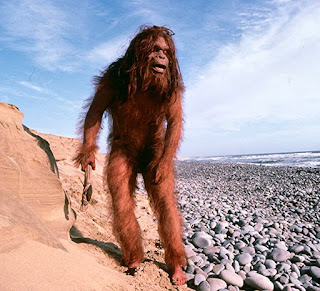 The unnamed australopithecine is played by Peter Elliott, and the fur suit as well as the constructed head and face that transform him into the man-ape are very impressive indeed. Viewing this movie constantly reminded me of the much later TV documentary series Walking With Cavemen (first screened in 2003, it was a successor to the highly successful, ground-breaking Walking With Dinosaurs and Walking with Beasts series). Certainly, Missing Link was indeed far ahead of its time, but its lack of any major storyline or dialogue (other than Gambon's occasional words) probably explained why it was not a commercial success when released, and why it is seemingly not available on DVD. (Following its cinema debut, it was released in VHS videocassette format, examples of which are occasionally listed for sale online, but these are usually quite pricey.)

This is a great shame, because Missing Link is very deserving of being seen, as a tragic testament to how our ancestors almost certainly contributed to these distant relatives' eventual extinction - unless the mysterious agogwe, séhité, kakundakari, and certain other diminutive hairy man-beasts reported across Africa in modern times are relict survivors?

Offering a taster of the dramatic wildlife vistas and compelling content of Missing Link, here is an official trailer for this very different but definitely must-watch movie.

I spent the evening movie-watching on my birthday last year, 9 December 2019, of which my favourite was the DVD of Missing Link.

Directed by Chris Butler, this delightfully droll animated crypto-classic from early 2019 tells the story of what is supposedly the very last sasquatch (a restrained but all the more hilarious vocal tour de force by Zach Galifianakis). Namely, a very sensitive male bigfoot named Susan (don't ask!), who hires adventurer Sir Lionel Frost (voiced with great aplomb by Hugh Jackman) to end his loneliness by transporting him to the Himalayas where he can be united with his nearest kin, the yetis. (Cryptozoological purists be warned: the yetis here are portrayed as having white fur, a traditional if mistaken representation, as according to local eyewitness reports these mystery man-beasts are actually brown- or red-furred.)

Along the way, they meet up with a former significant other of Sir Lionel, the feisty Adelina Fortnight (Zoe Saldana), and are pursued tenaciously by the evil henchmen of Frost's nemesis, the repressive, insane Lord Piggot-Dunceby (Stephen Fry). His obsessive goal is to prevent Frost's discovery of both Susan the bigfoot and the yetis of Shangri-La from ever becoming known to the world at large.

Speaking of which: my favourite character is the etiolated, secretive, and deliciously paranoid Yeti Elder, Dora, voiced with acerbic zeal by Emma Thompson. Also worth listening out for are Little Britain stars David Walliams as Lemuel Lint, Sir Lionel's former assistant, who barely escapes with his life from his ever-perilous role, and Matt Lucas as Mr Collick, the no-less neurotic assistant of Lord Piggot-Dunceby. 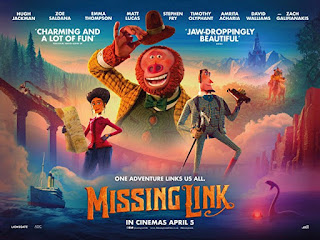 Full of the dry, quip-driven humour that always appeals to me, but with a hefty dollop of good old-fashioned visual slapstick thrown in too, Missing Link also includes many spectacularly eyecatching scenes (one of which features fellow cryptid Nessie, the Loch Ness monster!), but none more so than the splendorous ice palaces and hidden valley of the yetis. Watching this charming movie was without a doubt a very enjoyable and highly entertaining way to pass a birthday evening.

To prove my assertion, here is a very funny official trailer for Missing Link – and here is another one!

A version of this double-bill review of cryptozoology-themed movies can also be accessed here on my ShukerNature blog. 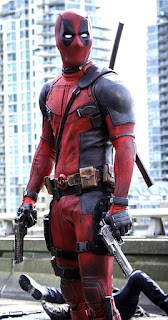